The Process Of Conversion Of Title In Kenya

The Process Of Conversion Of Title In Kenya 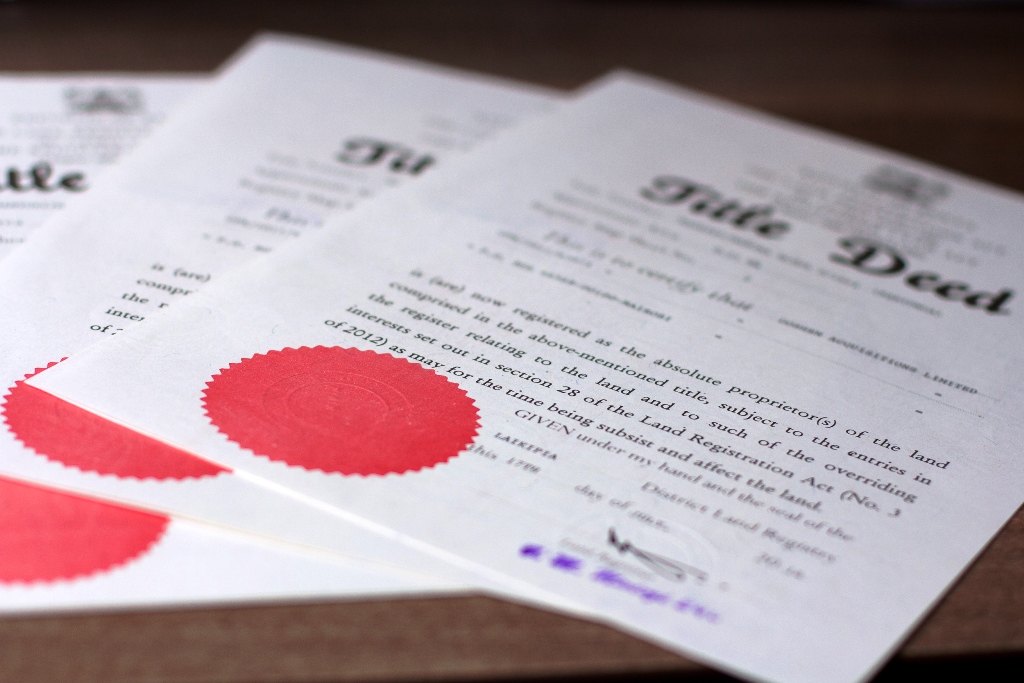 Enacted in 1902, the Act essentially sought to create a register of documents. It provided for both compulsory and optional registration. The Act made it obligatory to register any document that purported to confer a right, title or interest in immovable property. However, certain documents could be registered at the option of the owner such as Building Plans, Wills, Powers of Attorneys and Deed Polls.

This Act was enacted in 1915 and mostly dealt with land parcels considered as farm land such as land in Central Province, Kericho and Nairobi. The title deeds issued under this system contained the words “Indenture”, “Conveyance” or “indenture of conveyance” as part of their heading.

The Registration of Titles Act (Cap 281 Laws of Kenya)

This statute came into force in 1920 with the aim of improving the issuance of titles to land as well as regulating the same. Just like the Lands Titles Act, under this act, the documents evidencing ownership were Certificates of Ownership, Mortgage or Interest. The Registered Land Act (Cap 300 Laws of Kenya)

Under the Registered Land Act, A certificate of Lease was issued for leasehold Land and an Absolute title deed registered where the land in question was freehold land.

The process of conversion of titles

Essentially, the process of conversion begins with the preparation of cadastral maps which serve as a unified survey document together with a conversion list showing the old parcel numbers of land within a registration unit and their corresponding sizes.

Upon receipt of the cadastral maps and the conversion list from the registrar, the Cabinet Secretary in charge of the ministry of Land and Physical Planning shall in line with regulation 4 (4) of the Land Registration (Registration Units) Order, 2017, notify the Public through the Kenya Gazette and two daily newspapers of nationwide circulation of the list of old parcel numbers and new parcel numbers after conversion. The Gazette notice shall specify the date after which the land registry shall be open to the public for transactions or dealings within the registration unit.

Any complaints relating to information in the conversion list or cadastral maps shall file be filed within ninety (90) days from the date of publication of the notice. The complaints shall be made, in writing in Form LRA 96 set out in the Second Schedule to the Land Registration (Registration Units) Order, 2017 or Form LRA 67 set out in the Sixth Schedule to the Land Registration (General) Regulations, 2017 for the registration of a caution pending the clarification or resolution of any complaint. The complaints shall thereafter be resolved within ninety (90) after receipt.

At the commencement date, all registers maintained in any other registry previously dealing with the parcels within the registration unit shall be closed for any subsequent dealings and all transactions carried out in the new register.

The registrar will then issue a notice inviting registered owners to make an application for replacement of title documents from the closed registers.  The application shall be accompanied by the original title and the owner’s identification documents. The registrar will then replace the title deeds with new ones and retain the old title documents for records and safe custody.

However, it is important to note that this conversion does not interfere with the ownership, size and other interests registered against the respective title. When it comes to titles in the possession of third parties such as banks, hospitals and courts, the process of conversion shall commence on application by the proprietor.

The conversion process is an continuing process intended to be carried out in stages. The Ministry of Lands has already issued a Gazette Notice listing various parcels of Land to be converted. Land proprietors are expected to be vigilant and compliant with these notices. To this end land owners are encouraged to confirm whether their properties are listed and make complaints if any within the stipulated period.

The content of this document is intended to be of general use only. For specific legal advice on Optiven Limited Real Estate Investments please do not hesitate to contact us through the contact details contained below.